The Latest Update of the corona infection in Qatar

According to information released today by the Ministry of Public Health of the Government of Qatar, details of Corona virus (Covid-19) in Qatar are as follows: 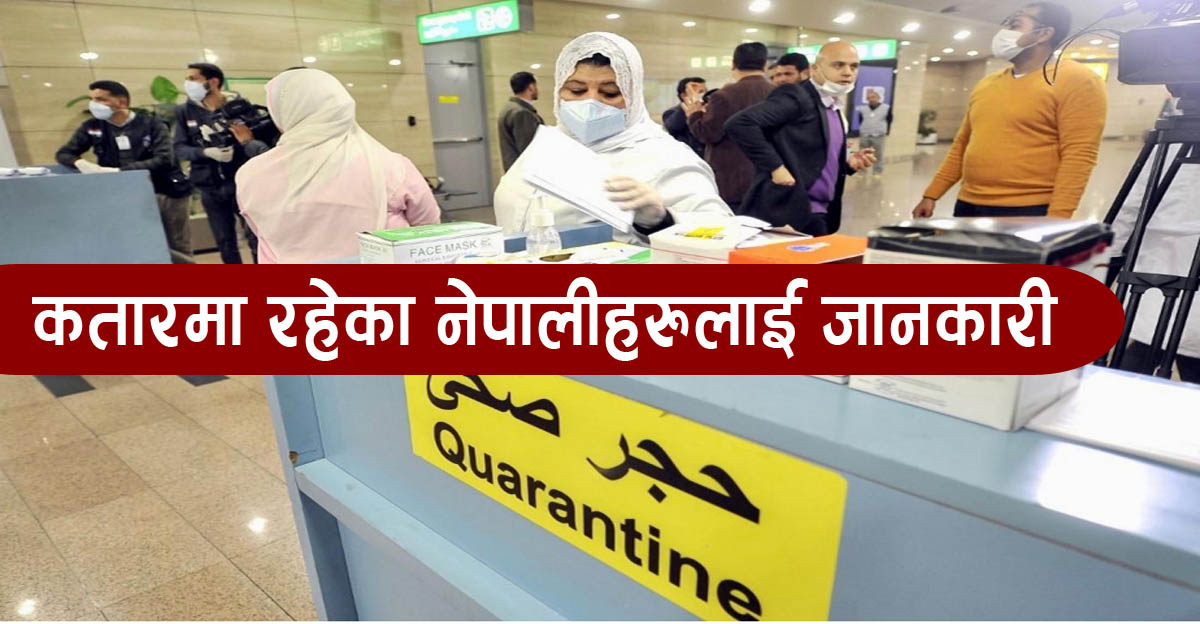 This information has been updated on the Facebook page by the Nepalese Embassy in Qatar. 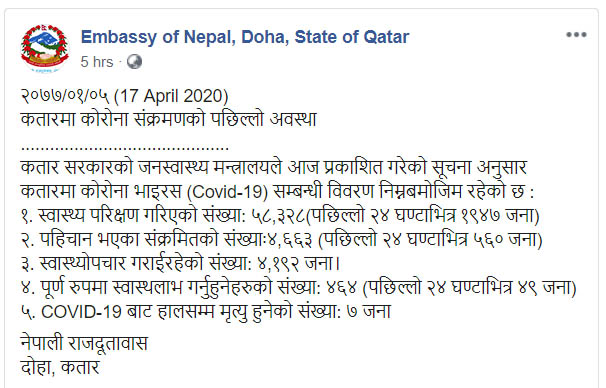 14 cases positive for COVID-19 reported on a single day

For the first time since the test of coronavirus in the country, 14 cases positive to COVID-19 have been reported on a day lone on Friday. Co-Spokesperson at the Ministry of Health and Population, Dr Samir Adhikari, confirmed that 12 persons were tested positive for coronavirus from Udayapur and two from Chitwan.

The Co-Spokesperson Dr Adhikari further said all of those from Udayapur were males and staying at Nuri mosque. Similarly, those from Chitwan are from same family- mother and son. With the additional 14 positive cases, contract tracing has been intensified.

The twelve COVID-19 males rage from the age between 20 to 40. Similarly, Bharatpur Hospital’s Chairman Dr Bhojraj Adhikari shared that 63-year-old woman and her 27-year-old son from Brahmanagar of Rapti municipality-8 in Chitwan district had contracted the infection. Both of them had arrived Nepal from the UK in mid-March via Qatar Airways. Rapid diagnostic test (RDT) was conducted on both the mother and son duo on Wednesday. They were currently in isolation ward of the Bharatpur Hospital.Nasal and throat swabs of both were sent to Kathmandu after conducting COVID-19 test on them twice on Thursday.

A high alertness has been maintained in the district after these two cases of COVID-19 were reported in the district. Chief District Officer of Chitwan Narayan Prasad Bhattarai shared that all those having come in contact of the mother and son since their arrival to the district would be tracked and kept in isolation.

UPDATES ON THE CORONAVIRUS DISEASE 2019 (COVID-19) SITUATION IN MALAYSIA

The last stage of the corona infection in Qatar, 345 people in last 24 hours